A conspiracy of time and purpose converged with history to determine the fate of Mt. Calvary Pentecostal Church for its clarity, its leaders, and its destiny. Mt. Calvary Pentecostal Church is steeped in the blend of aged wisdom, godly guidance and a youthful dynamic. A review of the Calvary origins reveals a longstanding and rich heritage of its courtship and successful marriage of the Spirit with dynamic leadership.

In 1918, the Reverend Solomon Smith formed then The Mt. Calvary Baptist Church in the basement of his home on 448 St. Louis Avenue in Youngstown, Ohio – a city uniquely positioned between the larger cities of Pittsburgh, Pennsylvania and Cleveland, Ohio. In 1924, the Anglin, Carpenter, Johnson, Wagner and Womack families, who, through their industriousness and ingenuity, built a new church on a lot purchased at 390 Chicago Avenue in Youngstown, Ohio.

This would be a proverbial holy ground on which a new but small church would be built, and too, serve as its advent into the surge of the evangelical move across the country known as the Pentecostal movement. In 1928, Pastor Smith turned the church over to Rev. A. J. Blackman. He was led to bring in a woman, Evangelist Deemer, who preached the need for the Holy Ghost. Then, in 1930, Evangelist Louise Hutson, came to the church and through a powerful but sensitive outreach revival, preached the doctrine of baptism in Jesus Name and the necessity of the Holy Spirit. This would be a pivotal moment in the Mt. Calvary history. There was a faction of members who had loyalty and a stern conviction to their Baptist origins; the others were convinced that the wave of the Spirit move was a revelation to a deeper relationship with God. This caused a split.

The victory would eventually go to those members who saw the Pentecostal movement as a revelation. It was considered a triumph of the spirit as they prevailed in a court battle for the building and renamed it legally The Mt. Calvary Pentecostal Church. Pastor Blackman would resign and turn the church over to Elder Curtis Gear, who became the first Pastor with the church now being Pentecostal. From the 1930’s to the early 1940’s the church would be led by a significant and qualified group of men AND women who laid the ground work for the church’s operating principles and future success: Elder O. V. Shire, Elder J. R. Reed, Elder T. C. Williams, Elder A. D. Bradley, Elder L. A. Stansbury.

In 1943, Elder Raymond L. and Lady Ann Robinson began their charge and Elder Robinson became one of the most indelible preachers and pastors of Mt. Calvary and for the Pentecostal Assemblies of the World, Inc. Heralded as anointed and prolific, he became the template of pastors. His youth and dynamic style along with his education positioned him to be amongst the youngest and fastest rising leaders of his era, which includes his promotion to General Secretary and as the youngest Bishop of the Pentecostal Assemblies of the World, Inc. In, 1965, Bishop Robinson moved the Mt. Calvary family to its current location on Oak Hill Avenue.

Time and history had a continued conspiracy with purposed as Bishop Robinson’s era transitioned into the leadership of Elder James E. Tyson who succeeded him as pastor of Mt. Calvary. It was a logical and spiritual succession after ten years of service as Assistant Pastor under Bishop Robinson.

After having served as Pastor in Canton, Ohio, and Leavenworth, Kansas, Elder James E. & Lady Evelyn-Haynesworth Tyson returned back to Youngstown, OH, and were officially appointed as Pastor of Mt. Calvary in 1967. Elder Tyson’s time and service promoted him with master qualifications as an affable and affirming leader who advanced in growth, balance and spiritual healing of the congregation. Lady Evelyn incorporated a wide variety of musical styles from Gospel to classical music into the repertoire of Calvary’s worship ministry and which still exists. Thus, Calvary has produced some of the world’s greatest musicians, singers, songwriters, directors. Elder Tyson was a builder. And build he did – not only buildings, but men. The Tysons served from 1967 through December 1970 as leaders of promise for the Mt. Calvary Pentecostal Church’s destiny.

Destiny summoned Bishop Tyson to Indianapolis, Indiana, in 1970 to pastor and where his leadership would be defined as much by his location as it would be by his spiritual gravitas and personable style. He would come to be known as Bishop Tyson, “The voice of Indianapolis” through radio & television, and “The people’s Pastor”. Indianapolis is where the geography of his legacy is deeply rooted in Apostolic ancestry and where he aptly evolved as a worthy holder of the title of Assistant Presiding Prelate of the Pentecostal Assemblies of the World, Inc.

The relocation of Bishop Tyson advanced the circle of conspiracy. Out of its revolution would come the time of Elder Norman L. Wagner.

After serving as a National Evangelist and as Bishop Tyson’s Assistant Pastor, on March 23, 1971, Elder Norman L. & Lady Rita Helen Wagner were installed as Pastor of the Mt. Calvary Pentecostal Church. Dynamic, didactic and charismatic are words associated with his leadership. Elder Wagner’s youthful leadership was often compared to that of Bishop Robinson and was manifested much through his demonstrative energy and drew a frenzy of young followers and discipleship and would become the new leadership and template of Pentecost. Everything would go from then to now; time was defined in present and future tenses. It was an era of church growth into unheard of advances in academics, tele-communications and community building within the Pentecostal circles.

Elder Wagner was considered a visionary as much as he was considered a dynamic preacher and pastor. He too, like Bishop Robinson, became one of the youngest Bishops AND also Presiding Prelates, along with Bishop Tyson as his Assistant Presiding Prelate for the Pentecostal Assemblies of the World, Inc. Bishop Wagner’s impact would be an indelible impression led by the spirit to undaunted and unparalleled accomplishments of any of his time. From 1971 to 2010, his leadership is the longest of any Pastor of Mt. Calvary and would converge in the conspiracy of time and purpose to a complete circle.

The history of Mt. Calvary is indeed defined by its relationship with aged wisdom, the spirit and with the youth. It has not neglected to support, prepare and to continue to elevate its progeny. There is a historical precedence of purpose. There is a likely succession message. This is the story of its conspiracy for the vision and the call to its “not unlikely” and next successor – C. Shawn and Krista Tyson.

On July 2010, Suffragan Bishop C. Shawn Tyson was selected as Pastor of the Mt. Calvary Pentecostal Church. Being the natural born son of Bishop James E. Tyson and the spiritual born son of Bishop Norman L. Wagner, Suffragan Bishop Tyson sat at the feet of these two icon leaders from his early childhood until the translation of both his fathers. Suffragan Bishop Tyson brings a combination of both his fathers to the Mt. Calvary family, along with his family’s rich musical background. Suffragan Bishop C. Shawn Tyson and his wife, Evangelist Krista M. Tyson, believe in the balanced enrichment of the total man – body, mind, spirit. With the help of God, their objectives are to: love all of God’s people and their families, focus on the emphasis of evangelism, winning the lost, prayer, worship, working in the community, spiritual AND natural education…AND LEGACY! 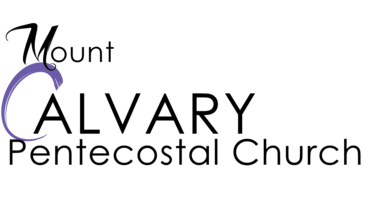